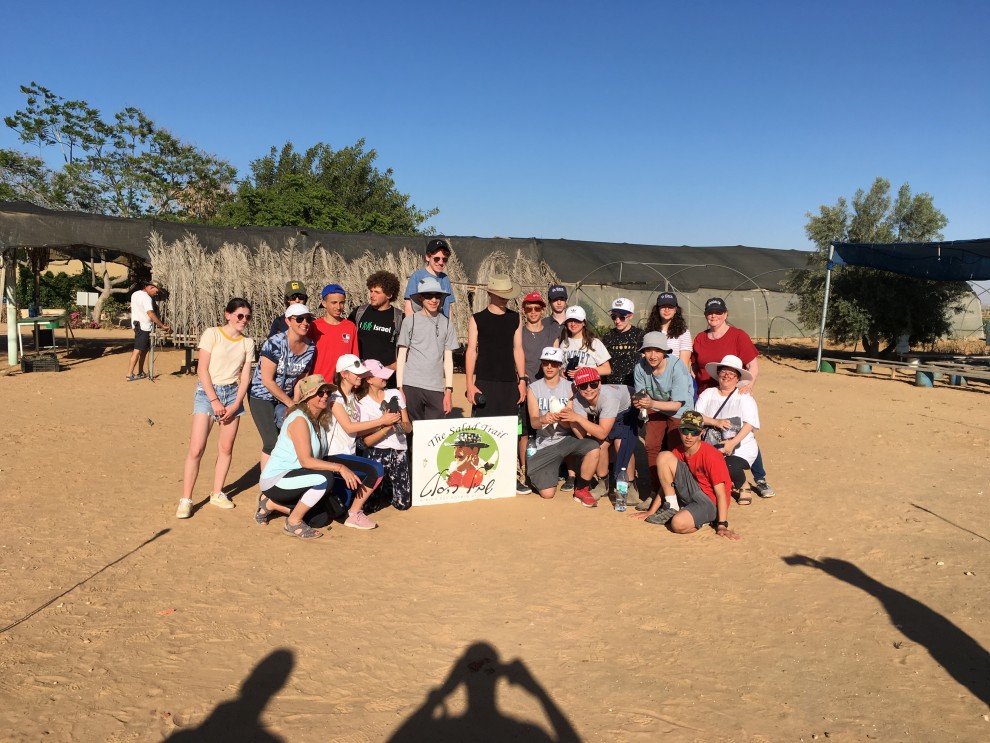 There are two days’ worth of blogging so we will try to catch you up.

One of the first things we should tell you is that Yaakov, our medic, had to leave. Our new medic is Sahar. It was very telling when he said that he couldn’t tell which students were from which school. The kids are fully integrated and it’s been a real bonding experience for all of us. If you could see the rooming list, you would see that everyone is all mixed up.

Yesterday, we visited Ben Gurion's grave where we learned that it was more important for him to have the date of his aliyah on his tombstone rather than any other iinformation about what he had done.

Very near to there was Ein Ovdat, a gorgeous desert area where we learned about the power of water in the desert.  We saw a beautiful waterfall that inspired us to take a lot of photos which you will no doubt receive when we return. It was boiling hot and we decided to turn back before the hike got too much for any of us.  No climbing up rungs on a mountain for this year. 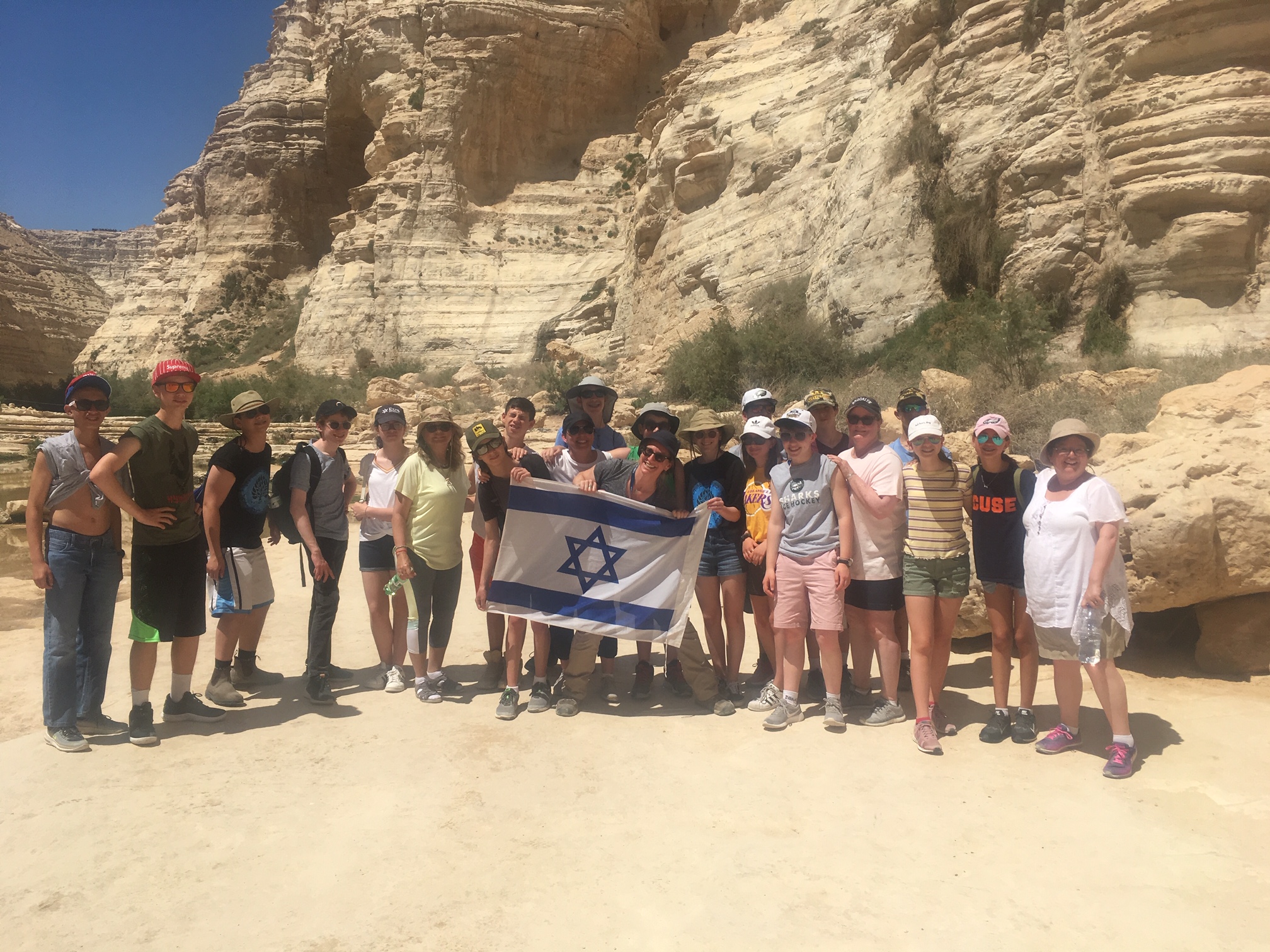 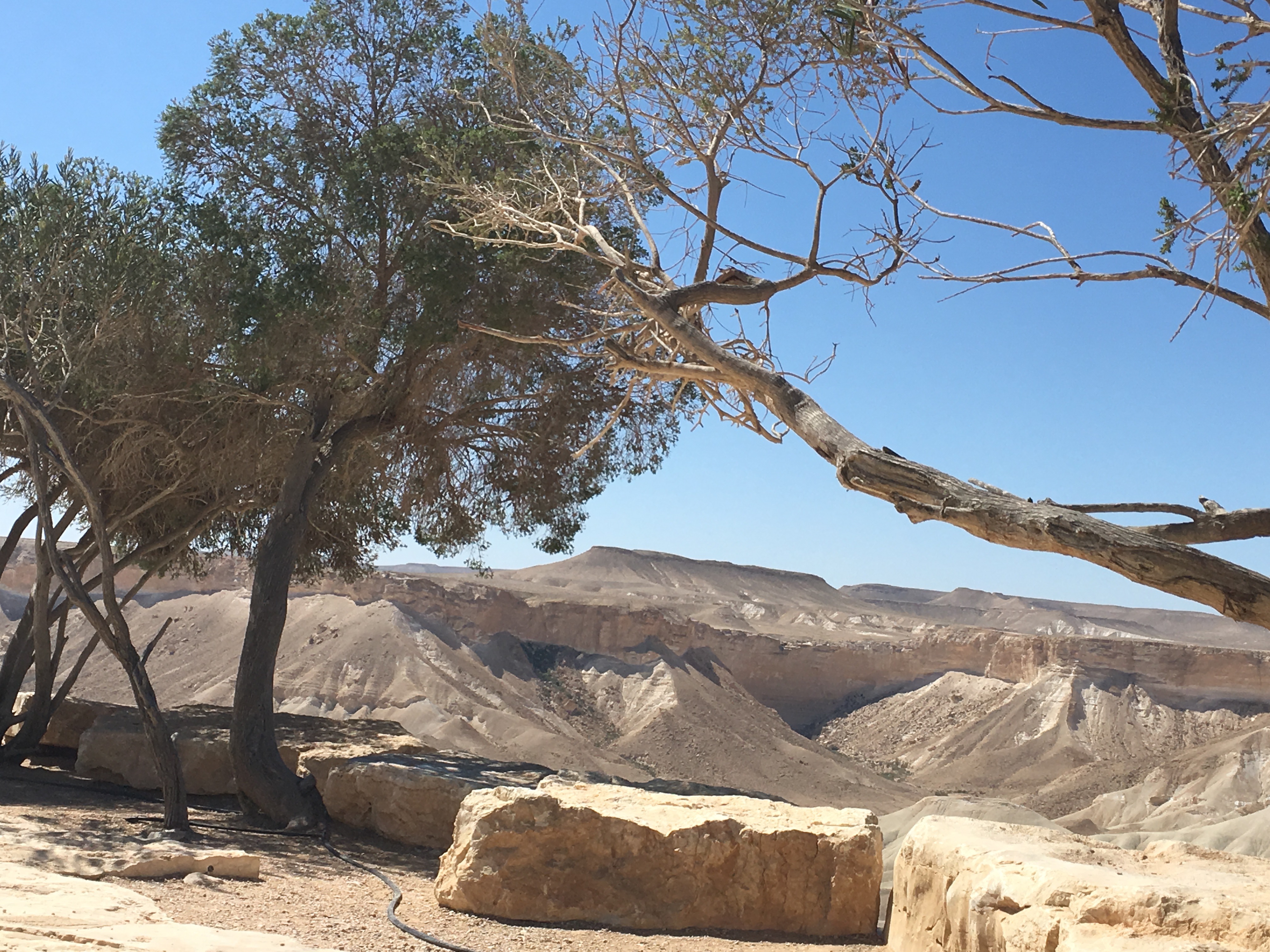 For lunch we drove to Dimona and on the way we found this massive playground for teenagers. The kids aboslutely loved it. We have never seen slides as big as the ones there. 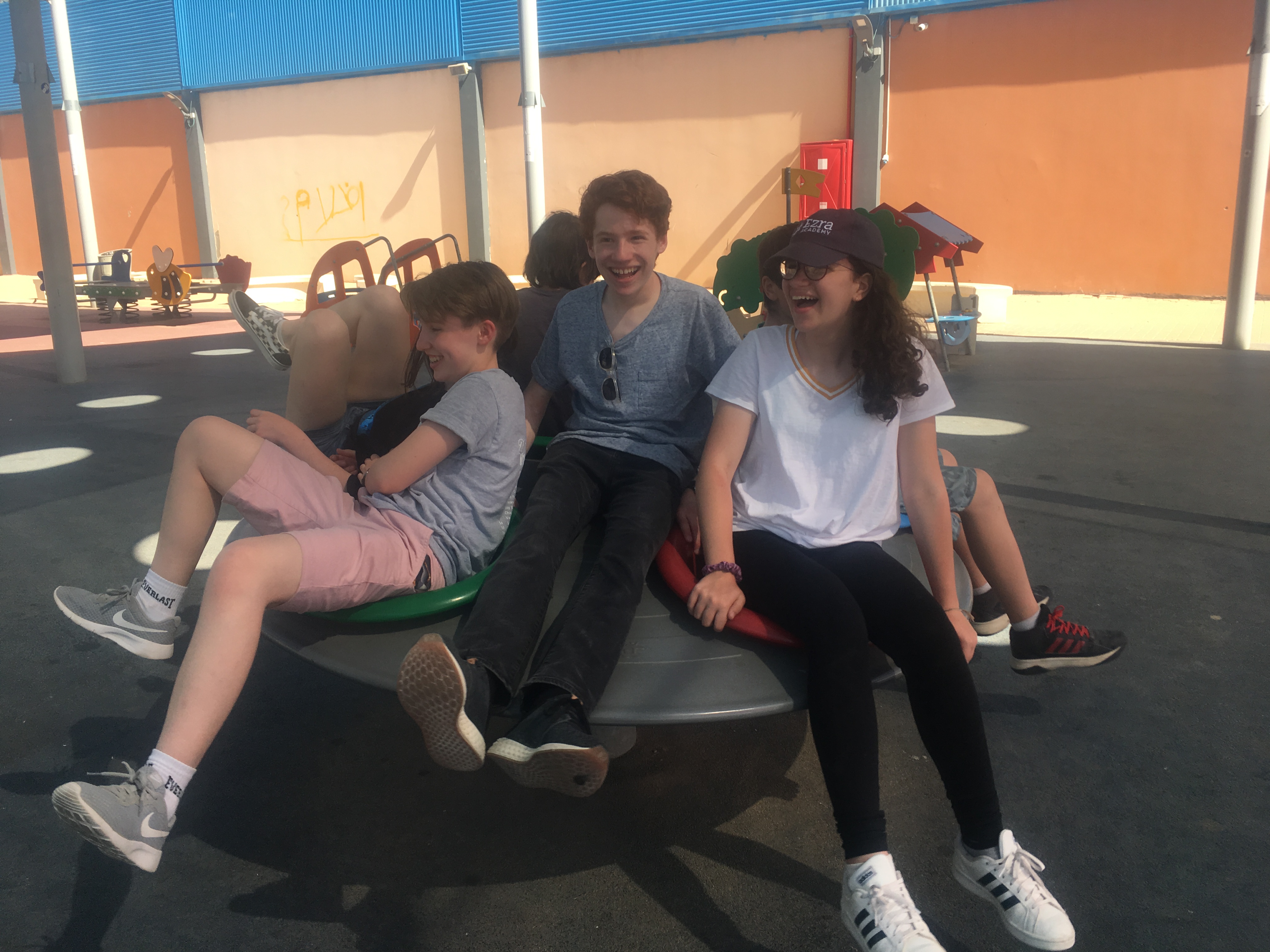 We then found a mall where the students got to buy lunch and hang out. We found a playground there too, only it was for infants, but that didn't seem to stop any of us from playing in it. 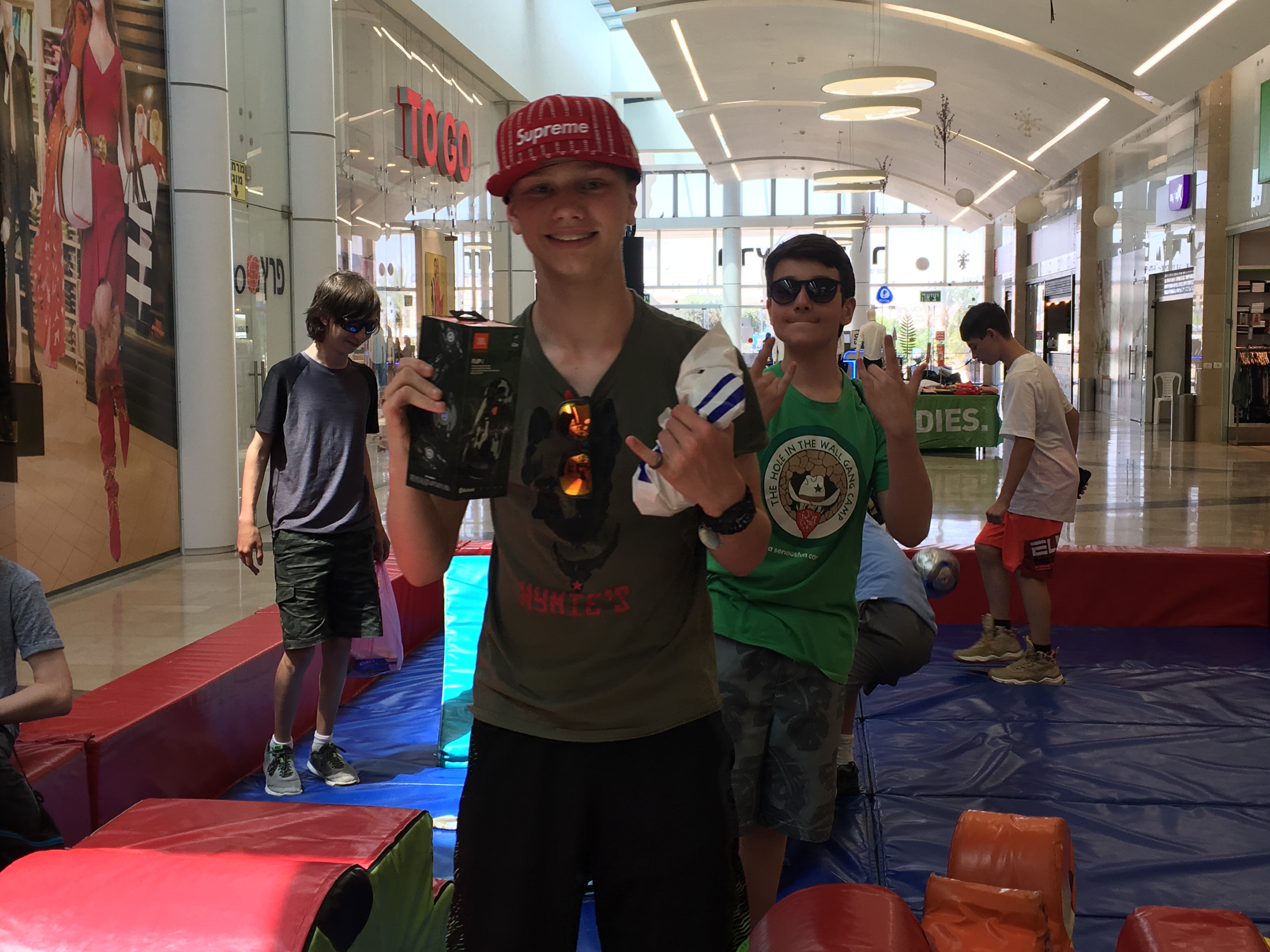 The highlight of the day was in K'far Nokdim, a Bedouin encampment where we talked with a woman called Suha (meaning wealth) who is redefining the role of women in Bedouin culture. 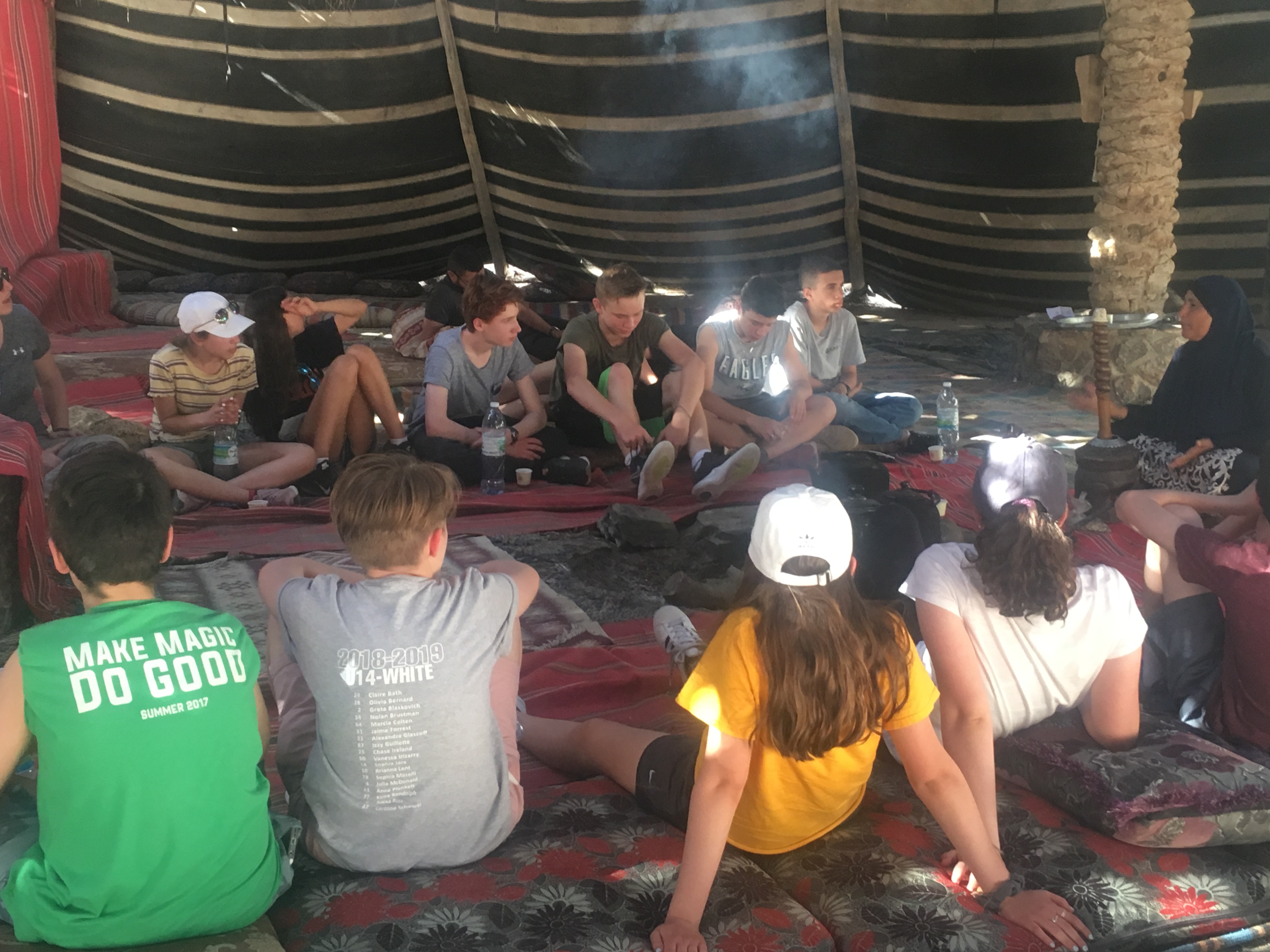 After that, we rode in the desert on a camel carravan. Some of us even named our camels. 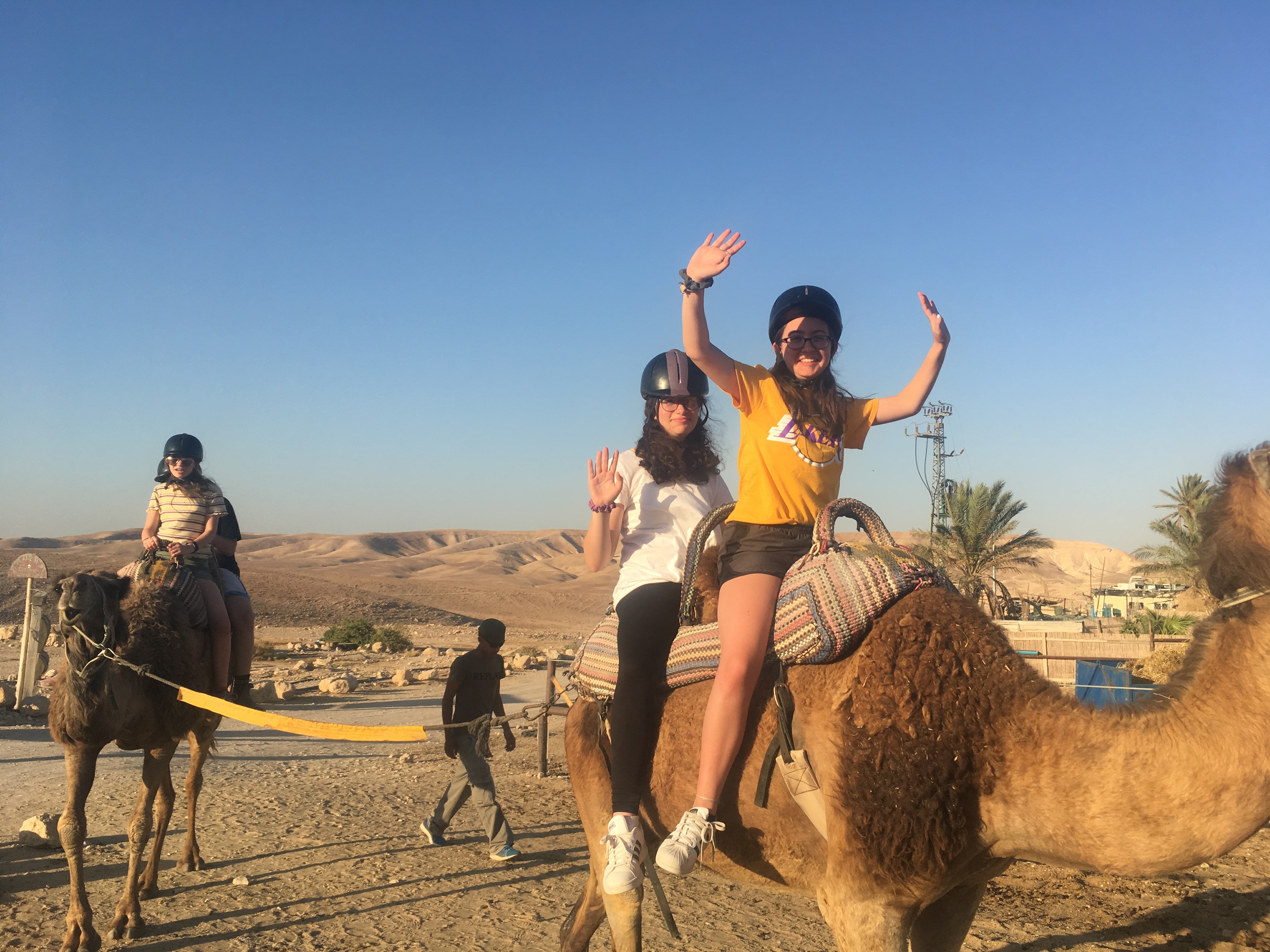 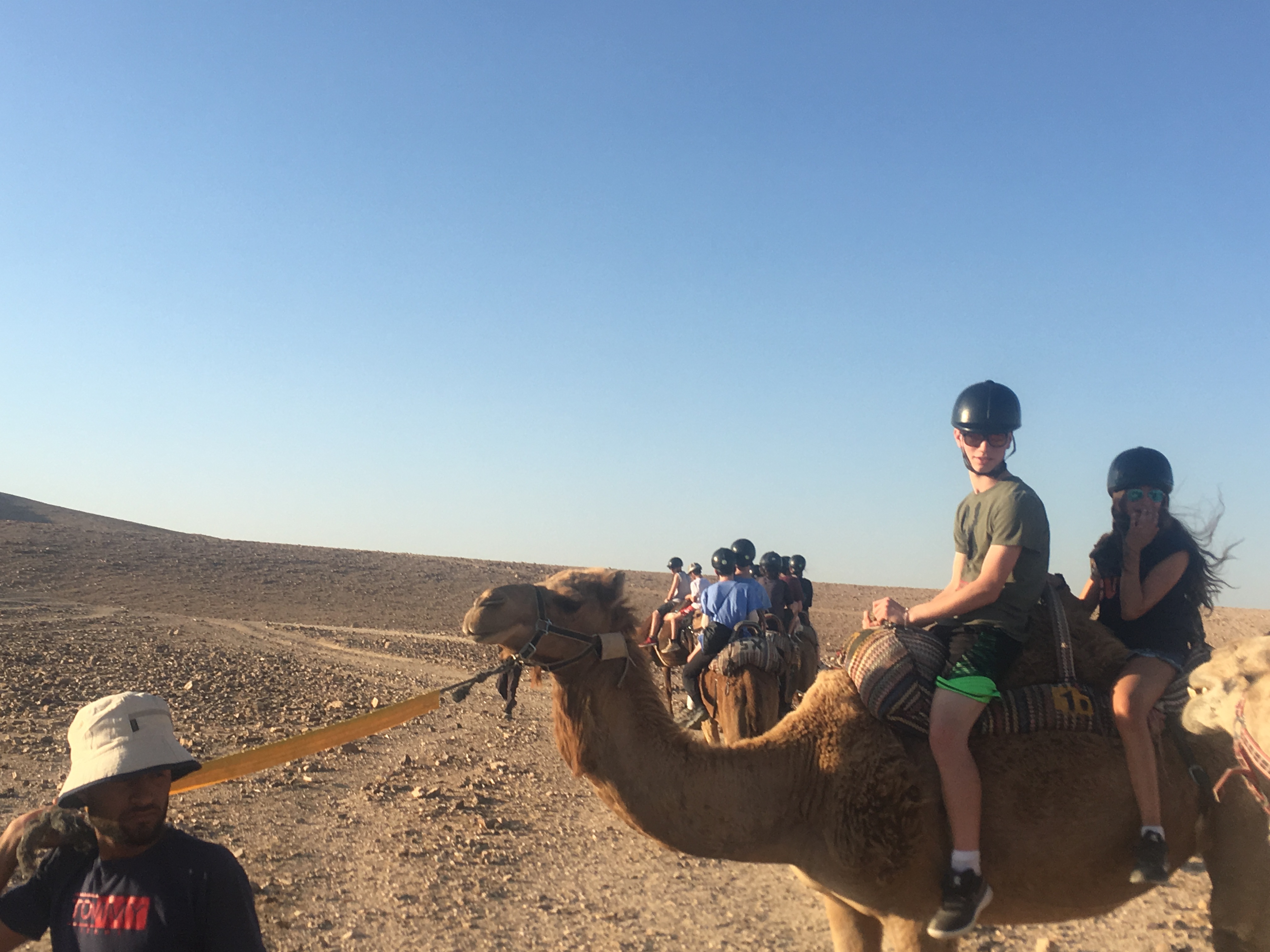 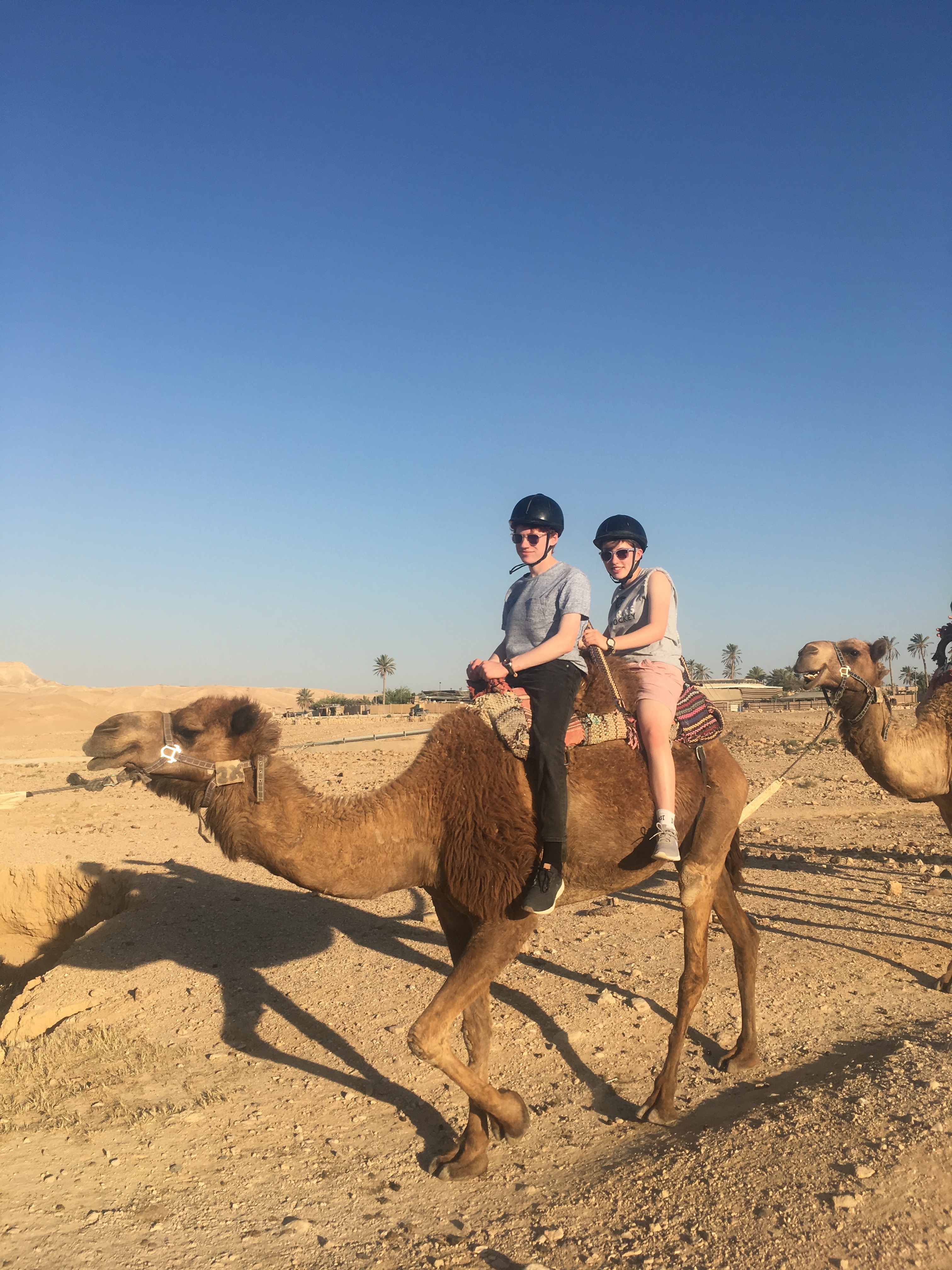 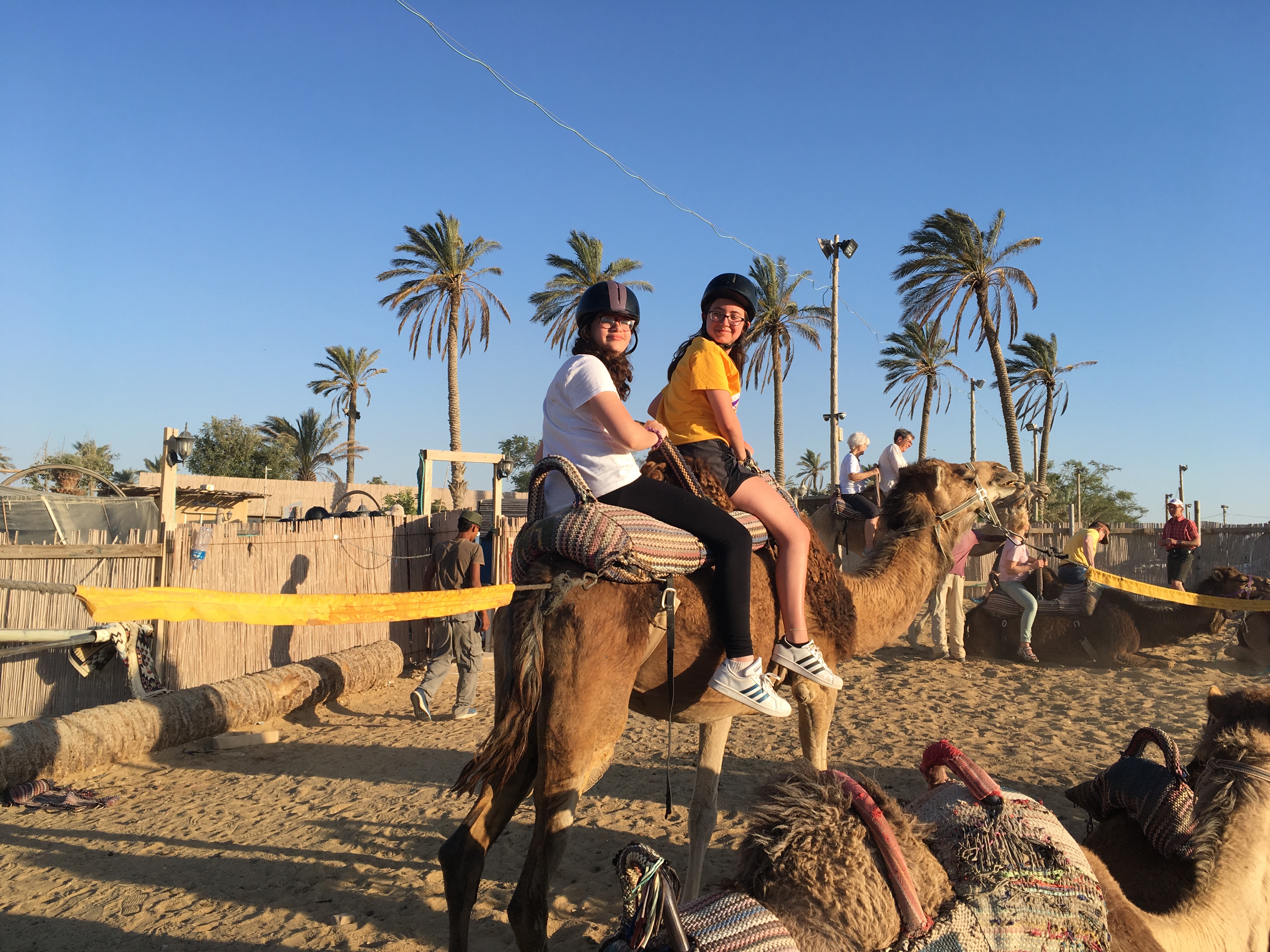 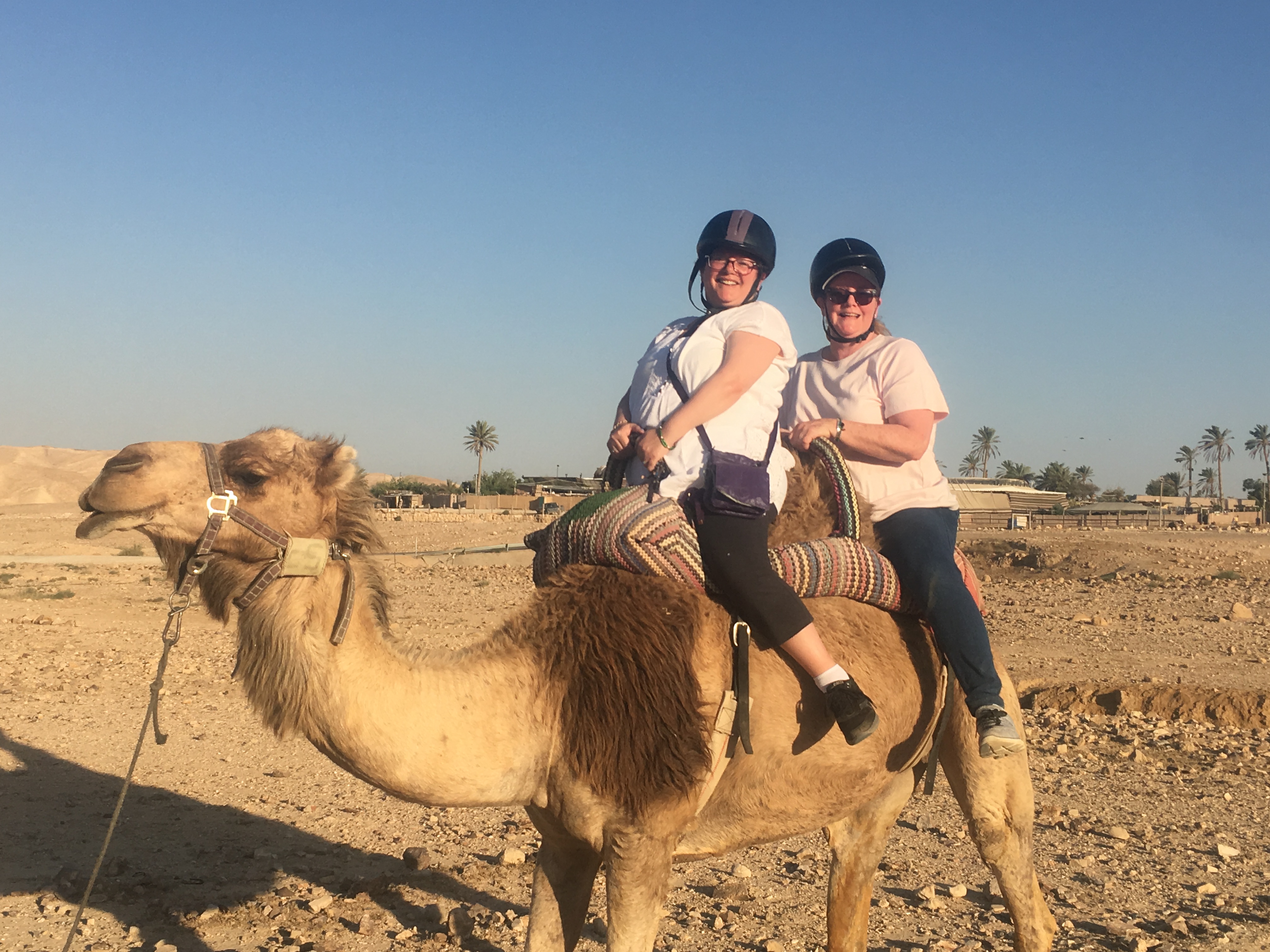 We ate a traditional Bedouin meal, which meant we ate with our hands. Following that we went on a stargazing walk in the desert, which gave us time to think about all sorts of things. 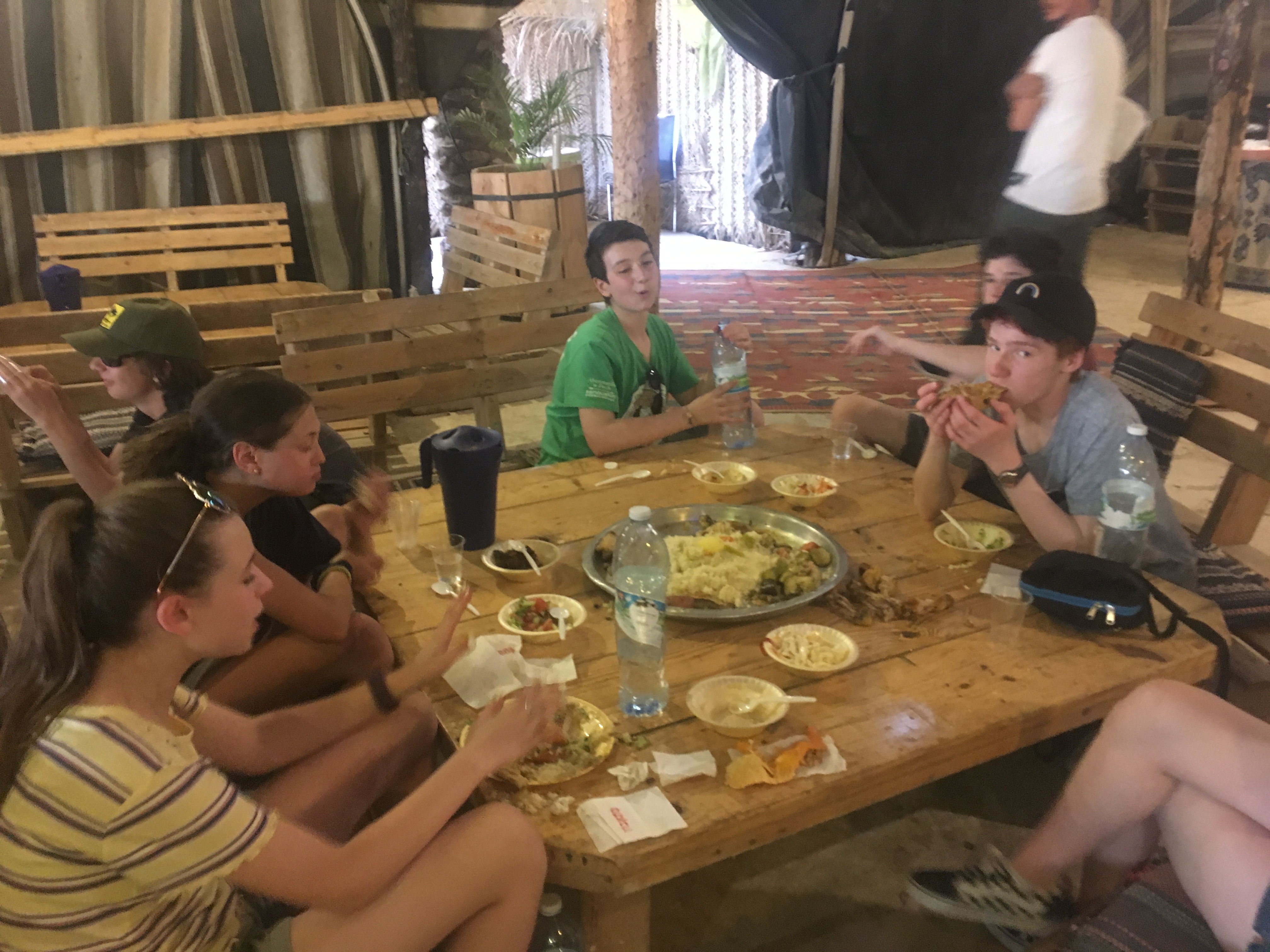 We woke up at 4 AM which was a little hard for the teachers, but since the kids didn't sleep that much, it wasn’t that hard for them! Nevertheless, everyone was in good spirits. We decided to see the sunrise because it’s beautiful and also because we knew it was going to be hot. 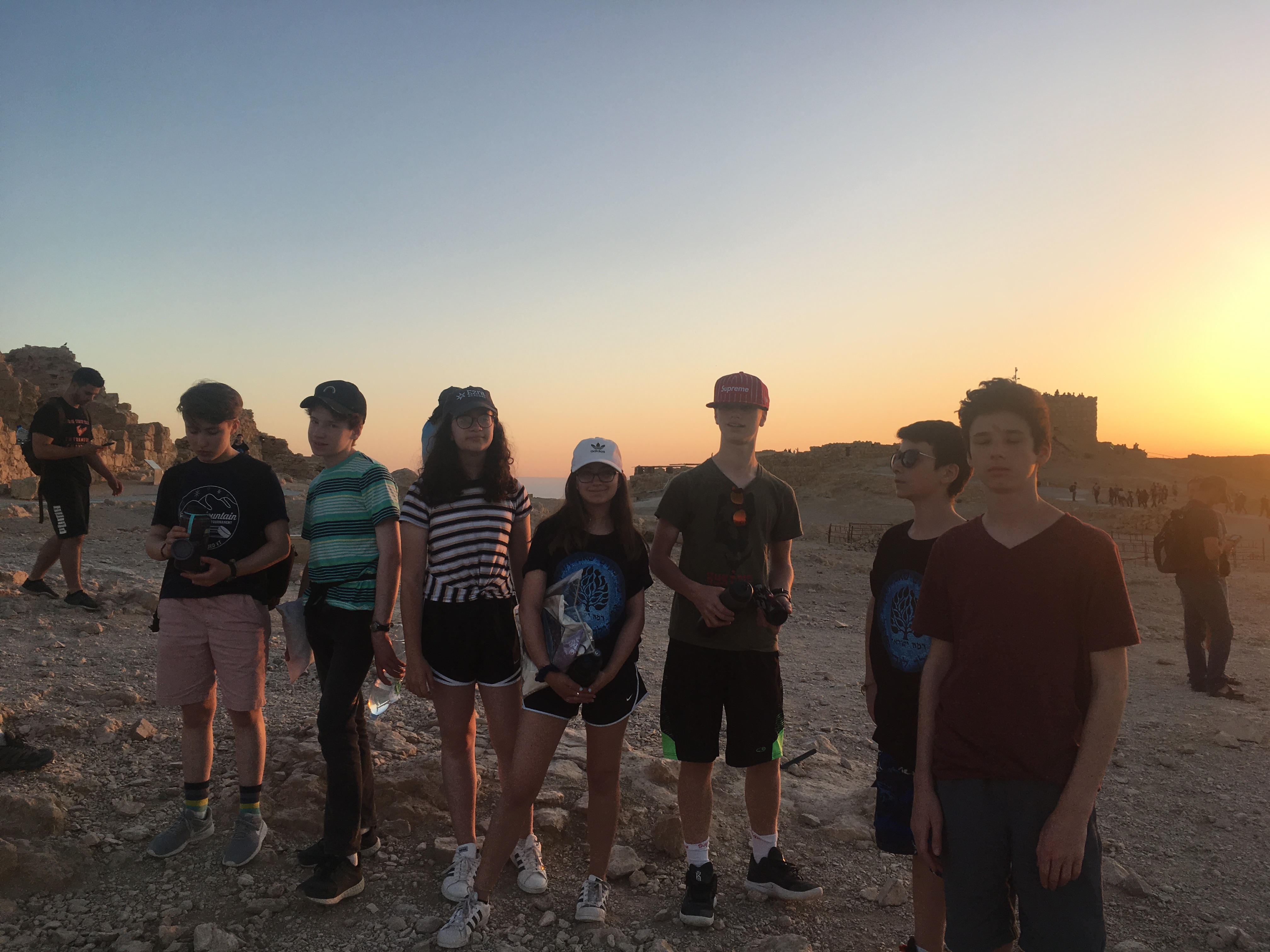 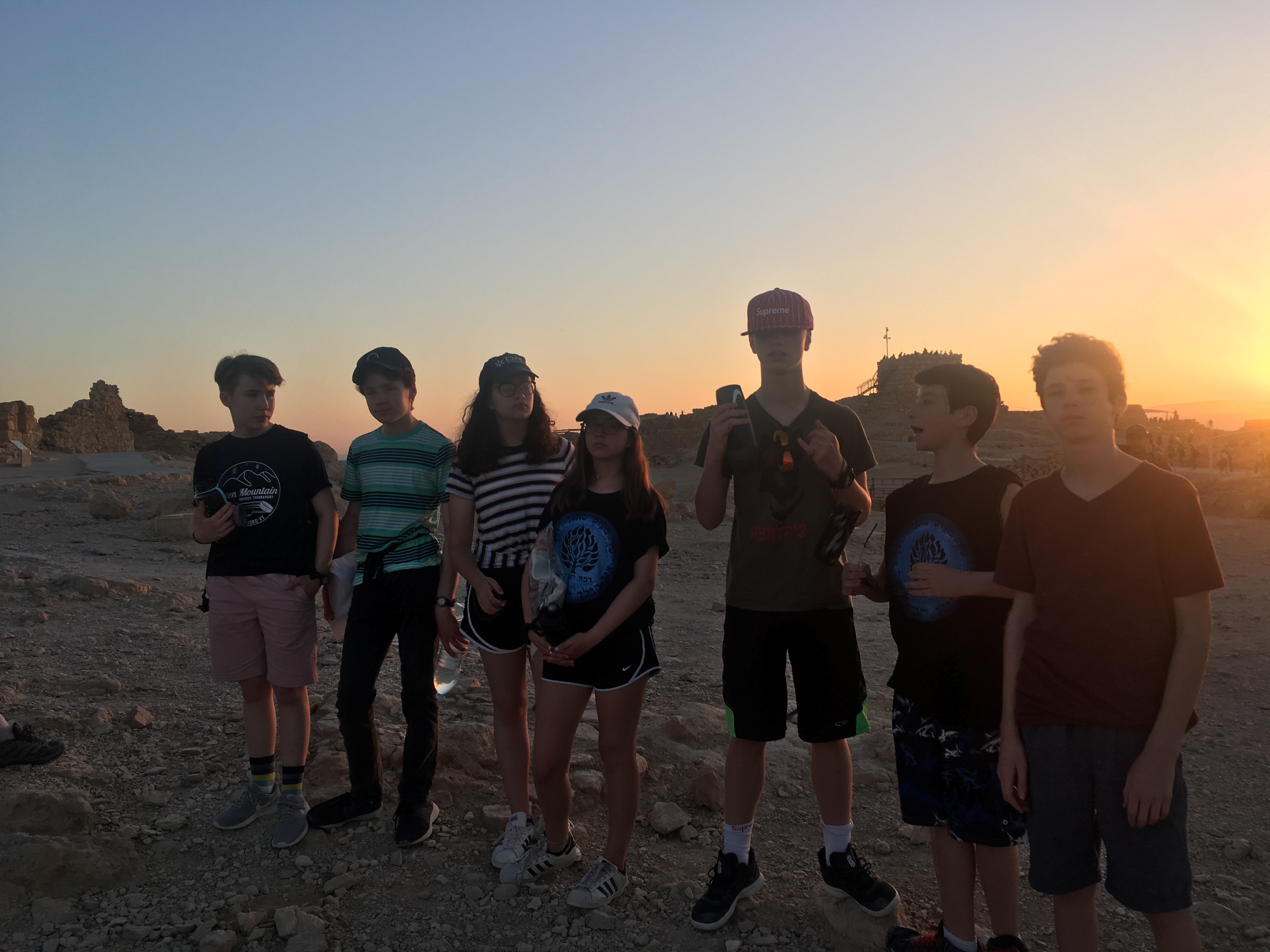 When we got to Masada, the entire Roman Ramp was covered with people and we joined a slow moving line. Yonit took pictures because she has never seen it like that before!

Once we arrived at the top we looked down at the amazing site below us. Yonit chose this spot because it was the place where there is no wall because that’s where the Romans breached the Jews’ camp. It was by there that we chose a spot to do tefillah. Facing Jerusalem meant facing out towards the desert which was a gorgeous sight. 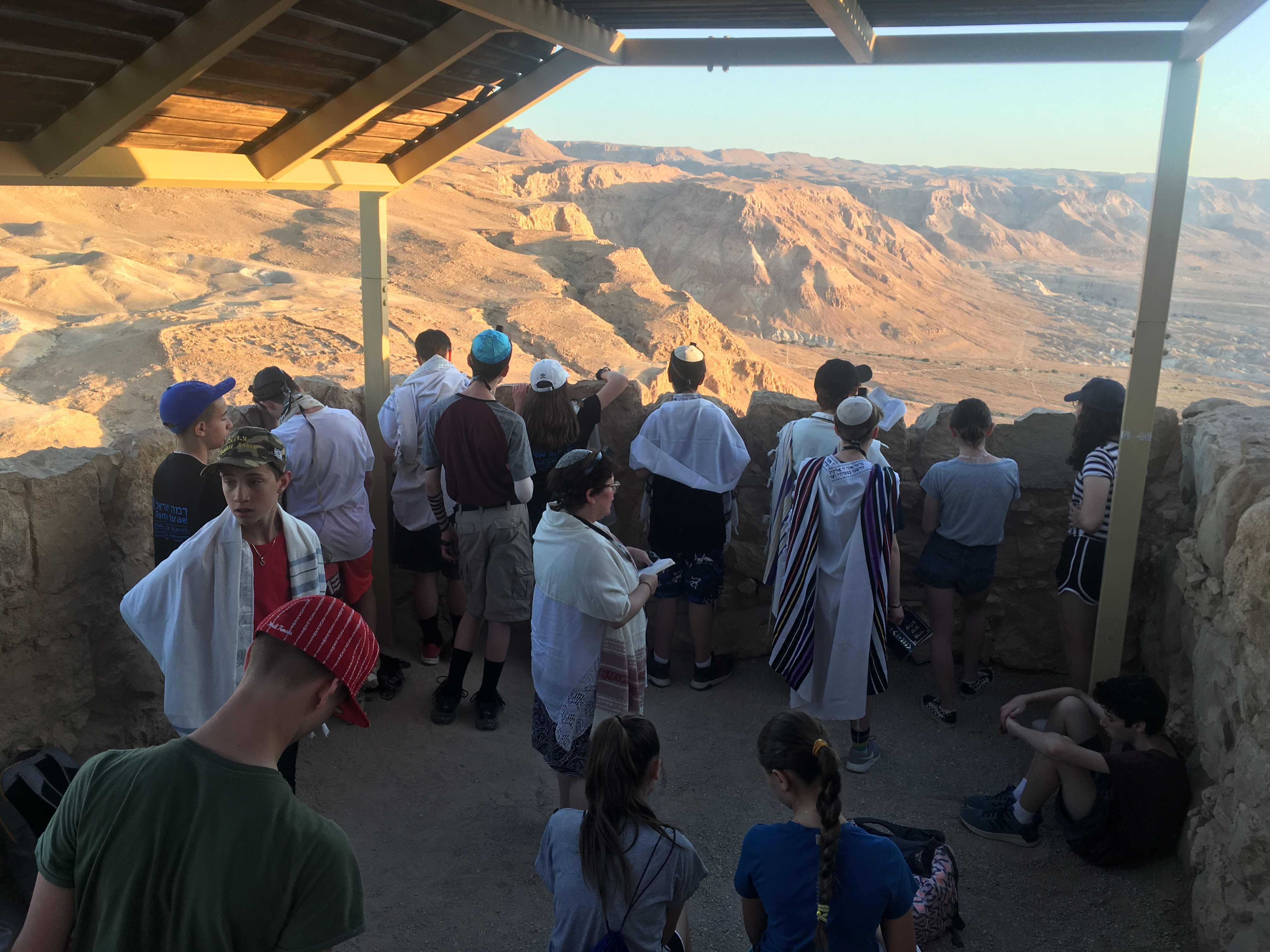 Yonit took us on a fun tour, the highlight of which was a play between Herod (played by Sophie from Kellman Brown) and our very own Reuben as Mariamne. (Herod’s first wife whom he killed because he thought she was going to kill him.) It was hilarious. 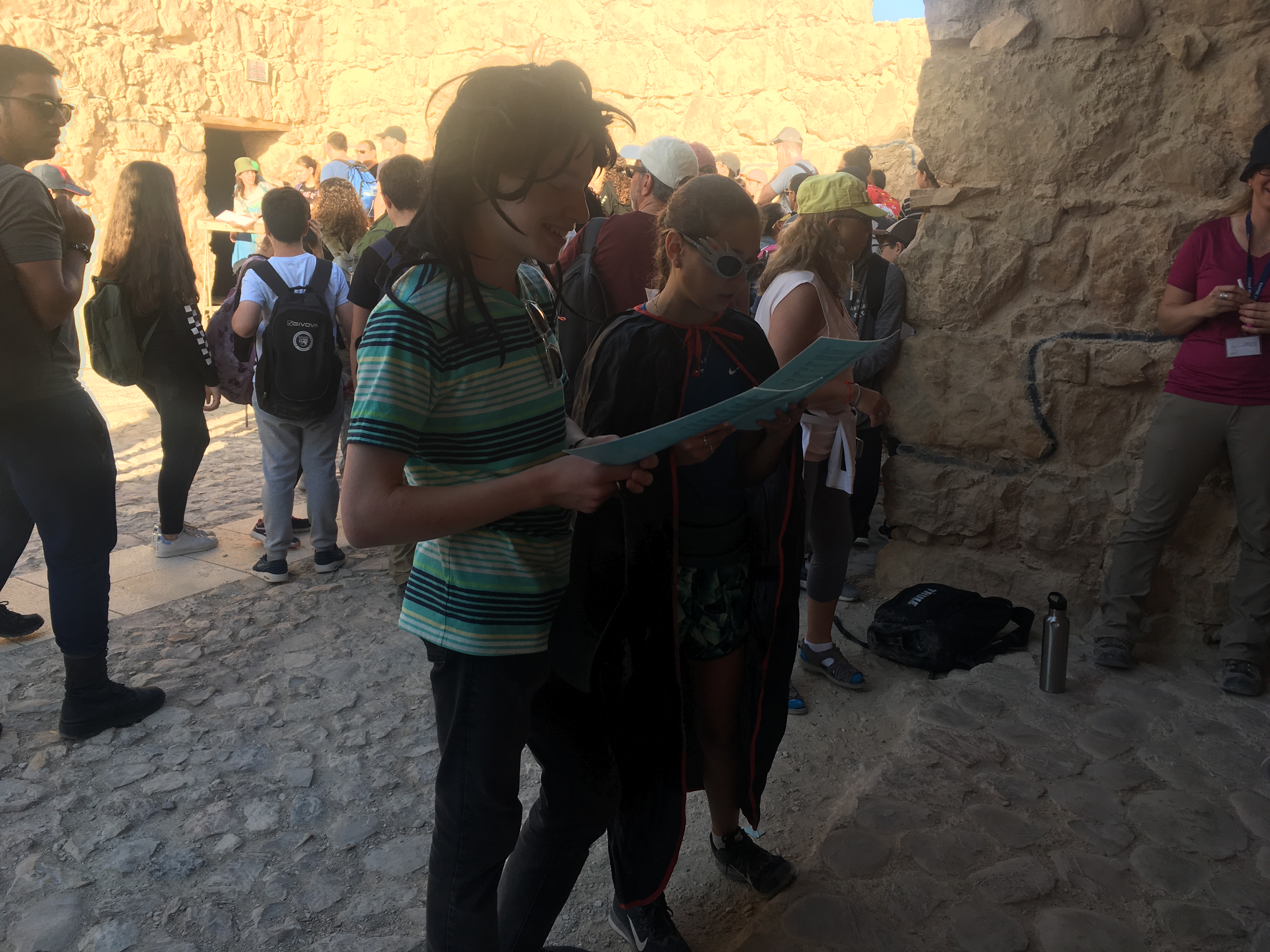 Then we entered the bathhouse. I don’t know if I ever mentioned that Yonit our guide is obviously an expect, but in archeology so is Karyn Ravski. They co-led the tour in the bathhouse, which was very informative and fun at the same time. Fascinating.  The students raced down the Snake Path to find breakfast waiting for them. Since it was just 7 O’clock, it was still fairly cool out. (Relative to Israeli weather, not CT!)

The Dead Sea was our next spot. Unfortunately, there was no mud there, but the saltiness of the Sea was combined with a very healthy dip in a pool (which was nice, because the salt stung certain sensitive areas). We washed off a bit and then had lunch. 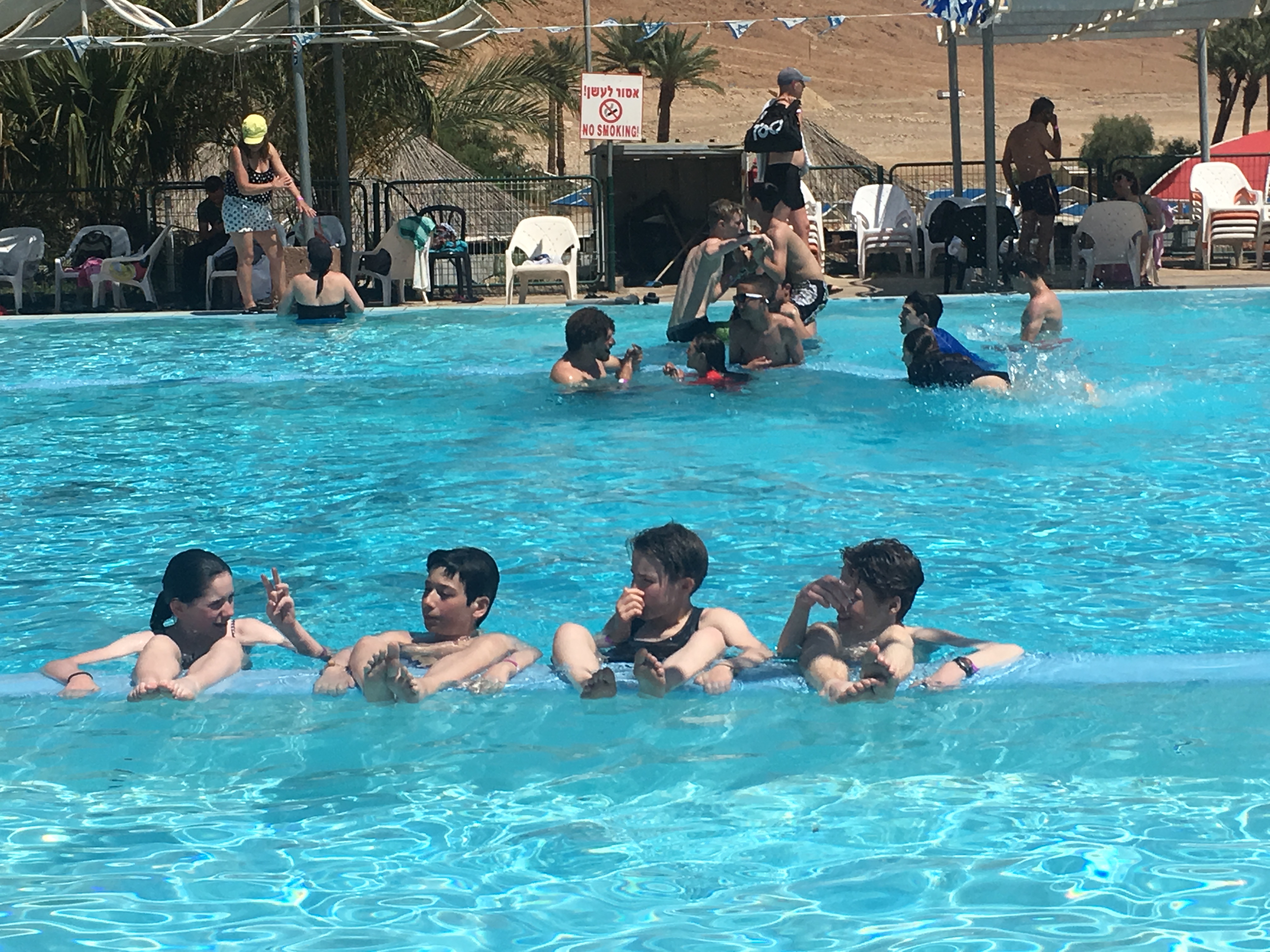 Our next stop was Ein Gedi, a beautiful hike through waterfalls. It was the perfect weather under the shade and the students had a lot of fun in the water. 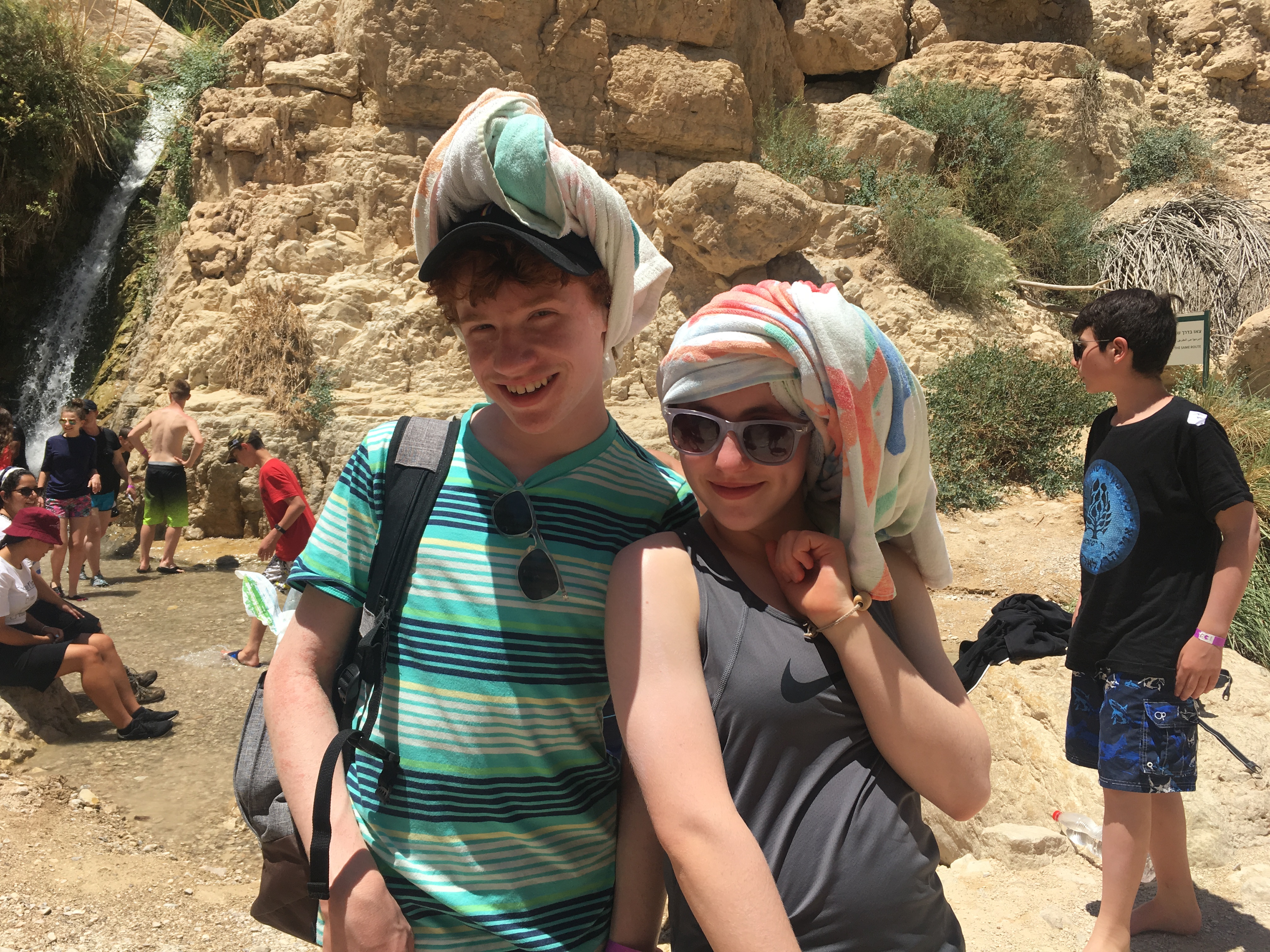 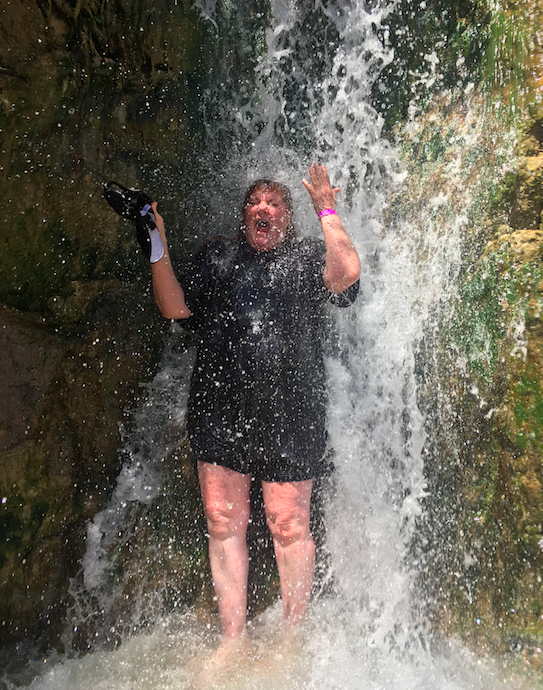 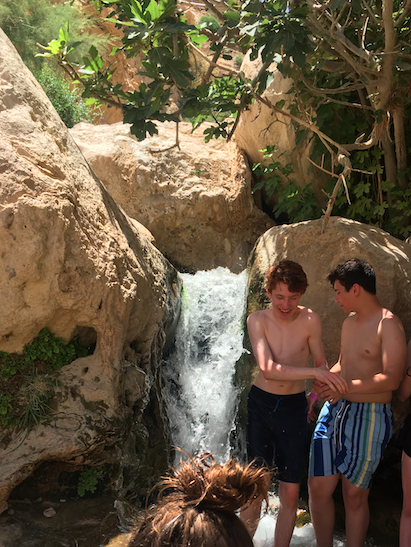 I see Ross only in the last picture. Did he go on the camels and to the Bedouin tent?
Looks like fun
Risa and David

It’s great to see and read you’re having such a wonderful trip!

What a fantastic couple of days!!! I am impressed at everyone's energy - dancing the night away, hiking till dawn, Dead Sea and Ein Gedi in one day.... What a way to do it all, rungs or no rungs. And I love the smiles at both playgrounds!!!

What a fantastic couple of days!!! I am impressed at everyone's energy - dancing the night away, hiking till dawn, Dead Sea and Ein Gedi in one day.... What a way to do it all, rungs or no rungs. And I love the smiles at both playgrounds!!!

It looks like you guys are having a spectacular time! What an amazing place to play!

AHHHH! I love this blog and these photos. How much fun you are having!!! I am so happy for all of you. Ein Gedi looks amazing. I missed that on my trip because I had a stomach virus and slept on the bus. Of all days. Guess I need to go back!!! It sounds like you are learning so many amazing things.
Can't wait to see you all.
XXOO Jackie